In this podcast episode, Joe Sanok speaks with Allie Casazza about minimalism, turning her passion into a business and how to make money with webinars.

Everyone loves payday. But loving a payroll provider? That’s a little weird. Still, small businesses across the country love running payroll with Gusto. Gusto automatically files and pays your taxes, it’s super easy to use, and you can add benefits and HR support to help take care of your team and keep your business safe. Plus, listeners get three months free when they run their first payroll. So if you want better payroll in 2019, now’s the time to start. To get 3 months free once you run your first payroll just go to gusto.com/joe. 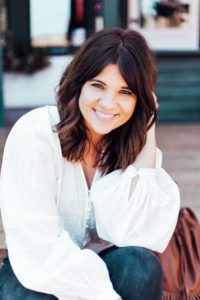 Allie Casazza is from Southern California, married her junior high sweetheart, and is a mom to 4 young children. She inspires and encourages her audience at AllieCasazza.com, is the host of The Purpose Show and is the creator of Your Uncluttered Home – an online decluttering course that earned her national attention for her philosophy of simple motherhood. Her business is built on minimalism and how we can all live a more purposeful life if we cut out all of the stuff to create space for enjoying the life we’re living! She has been featured on The Today Show, Good Morning America, The Huffington Post and even ABC News. Everyone has really taken to her realistic, doable mom-friendly, philosophy of minimalism and simplified living!

After having her third child, Allie was a stay at home mom, living in a house that was too big and too expensive and feeling stretched really thin. With 3 kids under 3 she was feeling very overwhelmed and found herself struggling with depression. In her search to get it together the answer always seemed to be to get organized but found that this didn’t work. A realization came to mind that she had too much stuff and if she let go of it all she wouldn’t have that much to maintain – and that is what she did.

In this podcast episode, Joe Sanok speaks with Allie Casazza about minimalism and how she turned her passion into a business.

It’s all about developing rhythms.

Turning A Big Idea Into A Business

After going through a very difficult time when Allie’s husband lost his job she was fed up with struggling. She decided to start investigating how she could turn her blog into a business. Having stumbled across some courses which would help her, she still couldn’t sign up for them as she could not afford it. Searching on Google then became her teacher and she tried to find how to do a webinar without money. After a lot of trial and error she figured it out and pre-sold a course to her small audience – beating her husband’s monthly income in one day!

My webinars make 6 figures every time now. Webinars are the key to email growth and getting those cash injections for your business that you need so badly.

Creating Your Own Webinar Platform

You can do this by:

Why is brand consistency important for building trust between the company and its audience? Are there pillars of web design to make sure to…